Tricare Stafford Lakes – Independent Living Units
Tricare Stafford Lakes is a luxury aged residence on Brisbane's Northside including a dedicated dementia wing and rooms with views of adjacent parklands. As part of further development to the master plan of the site, between 2009 - 2019 Tricare undertook a development of new independent living units (Buildings 1 and 2).

Tricare first commenced design and foundation construction works of Buildings 1 and 2 at their Stafford Lakes facility in 2009. The project was subsequently put on hold, and the DMA Engineers team recommenced design work in 2013, and again in 2016 after another hold, following which the project was completed and officially opened in 2019.

Buildings 1 + 2 are interconnected, and comprise of five levels per building – basement level parking plus 4 storeys with 3 units each level for a total of 24 independent living units.

DMA Engineers were engaged by Tricare to deliver Electrical (including dry fire), Mechanical and Vertical Transport design services.  The independent living units were designed to suit residents who wanted the Tricare offering, but with a level of independence combined with luxury, high-end finishes.  The work undertaken by our team to help deliver the units including provisions for nurse call in bathrooms, and integration to the existing Tricare site communications network.

Our team continued to work closely with TriCare and the builder throughout the construction phase to ensure a seamless delivery and minimise delays. 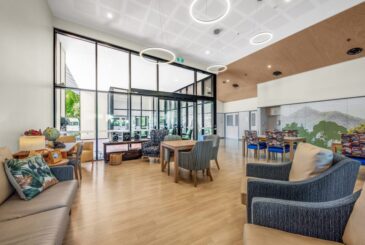